The First Hello Kitty Item Ever Made: Super Cute

I thought the best way to kick things off here at Hello Kitty Guide was to start at the beginning. Turn your time machines back to 1974 and behold, the first Hello Kitty item ever made: 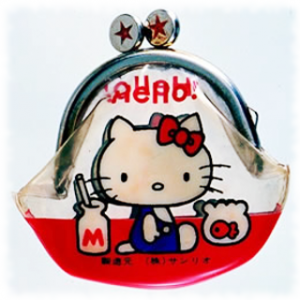 Little did the world know at the time that this tiny vinyl coin purse was the start of a cuteness phenomenon!

The coin purse featured a sweet faced little white cat in blue overalls and red bow, sitting between a bottle of milk and a fishbowl. The top of the coin purse had the word ‘Hello!’ written in English, though it was hard to read while the coin purse was closed. And the tabs to close the coin purse had red stars on a white background, a nice touch to bring the whole thing together.

In the years to come, people around the world would come to know Hello Kitty as the measure of all things adorable. But back in 1974, it was only those lucky few in Japan who seen this little coin purse that had any idea.

Hi, my name is Anita and I'm your guide to all things Hello Kitty! If you have any questions about Hello Kitty feel free to leave a comment or write me at: anita@hellokittyguide.com